Yellow banana wigs, boat rides, sounds of a tropical steel drum band and perfect late summer weather got the party started at the Port for the 8th Annual Banana Festival on September 28, 2019! Welcoming over 12,000 people inside the Port, Oxnard Harbor District President Jess Herrera stated, “The Port of Hueneme has always been the little Port that could and can do big things. Thanks to the ability of our talented staff to work toward a common vision and their individual strengths and accomplishments, there is only one way that this Port can continue to go, and that’s forward.” 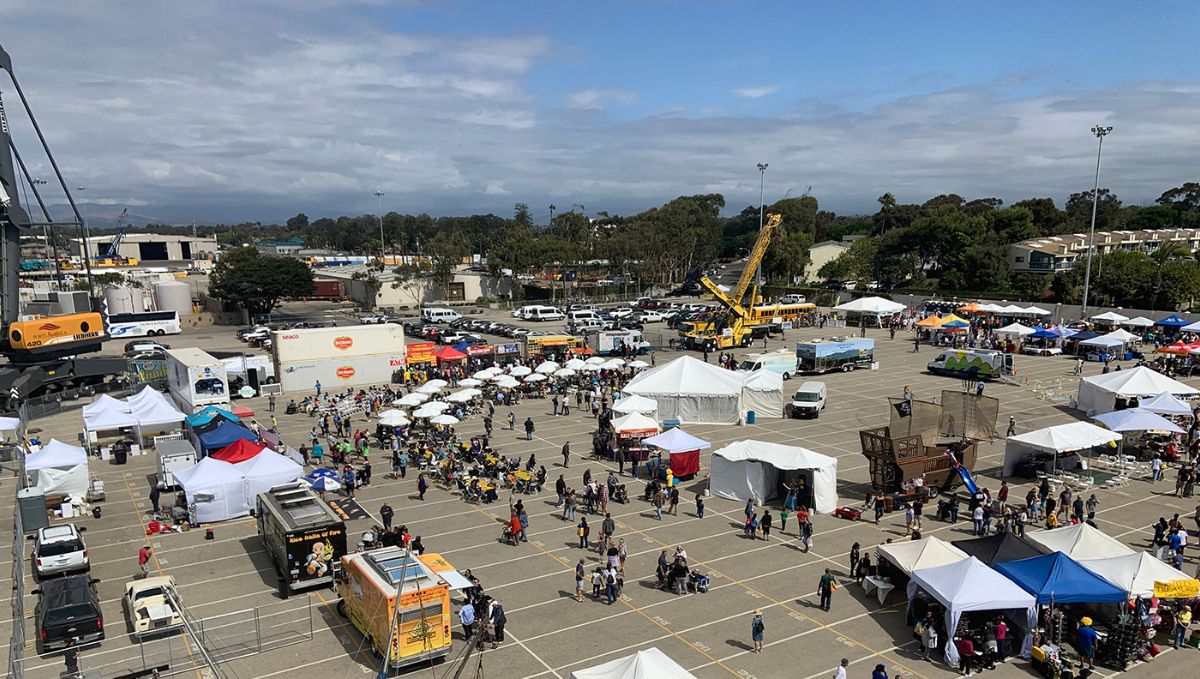 Eager festivalgoers lined up at the entrance to be first in line for the Port’s famous boat tours of the harbor to get a behind the scenes look at Port operations. As the community explored, they learned that the Port is one of the nation’s top ten automobile ports and a gateway to move the crops grown here in Ventura County to global trading partners. Of course, the banana was a big part of the show, being the Port’s largest import commodity. Tour attendees also learned that the Port is the Greenest Port in the USA, having reduced air emissions by 85% since 2009.

“It’s another day in paradise at the Port of Hueneme! I am so glad that we have an immense amount of people here today enjoying the hospitality that the Port has to offer,” said Oxnard Harbor District Vice President Jess Ramirez. “This was my vision when we first started the Festival over eight years ago, to bring our community into the Port to see all of our equipment and cranes so they can see what makes this Port move cargo.” The Port’s union labor partners were present at the Festival, showcasing their trades under the Port’s first-ever Project Labor Agreement.

Attendees danced their way around the festival celebrating the over 3.3 billion bananas that come through the Port of Hueneme each year, making the it the banana capital of the West Coast. They were treated to free bananas from Chiquita and Del Monte Fresh, the Port’s two largest banana importers. Attendees were delighted with banana-inspired foods including banana taffy, deep fried banana fritters, banana-flavored popcorn, banana beignets, chocolate frozen bananas, banana funnel cake — and on the savory side, banana empanadas, banana lumpias and peanut butter banana melts from the grilled cheese truck! 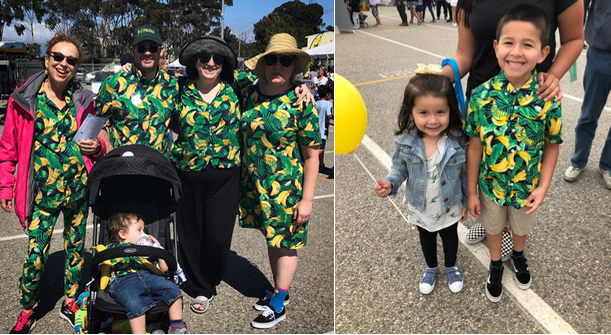 A bunch of banana fanatics in matching outfits

During the main stage program, the Oxnard Harbor District Commissioners were joined by several elected and government officials including:

This year’s main stage backdrop was the most impressive yet, with the Port’s first-ever electric hybrid mobile harbor crane towering over the crowd. The crane will soon run completely on electricity and reduce air emissions even further during Port operations. 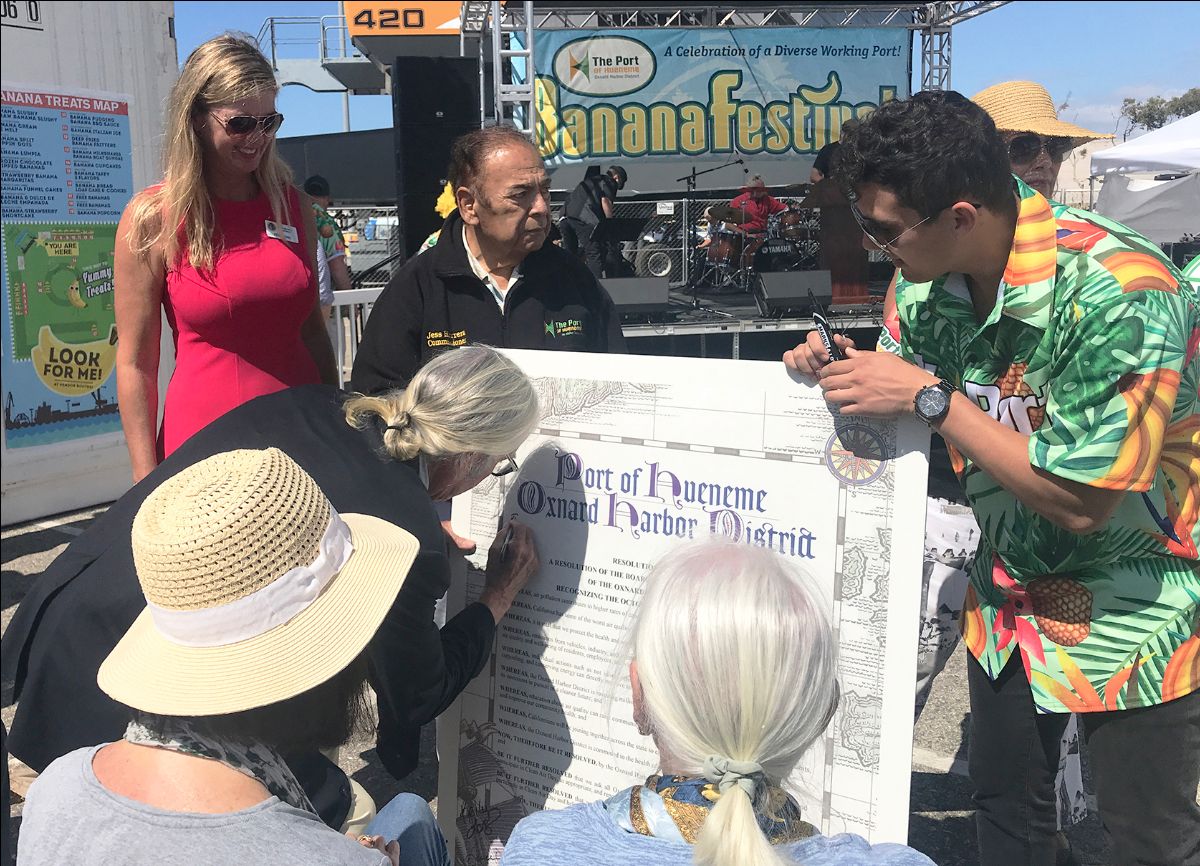 After signing the Port’s Clean Air Day Resolution on stage, Commissioner Mary Anne Rooney stated, “We appreciate the community coming out to support the Port, our clean air initiatives, and all of our environmental projects that we a working on to benefit our residents and the surrounding ecosystem.” 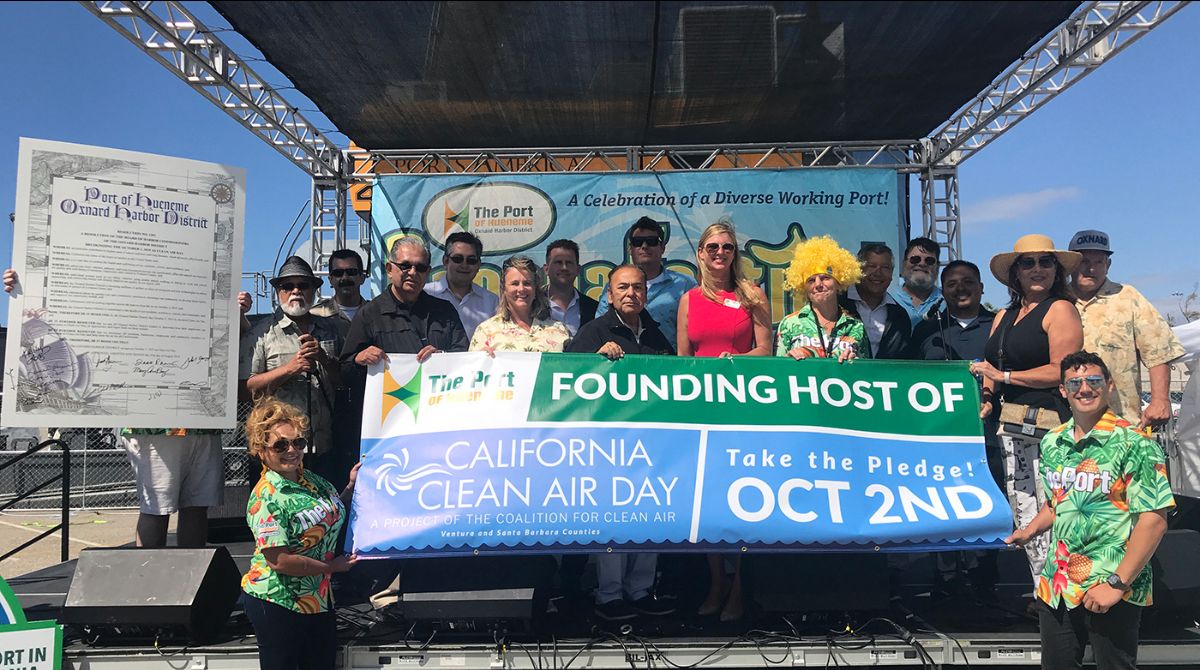 Oxnard Harbor District Secretary Jason Hodge said, “It’s a great weekend to have all these people come to the Port to see our environmental progress in action, and a perfect segue into Ventura County’s first Clean Air Day, of which we are proud to be the founding host.” 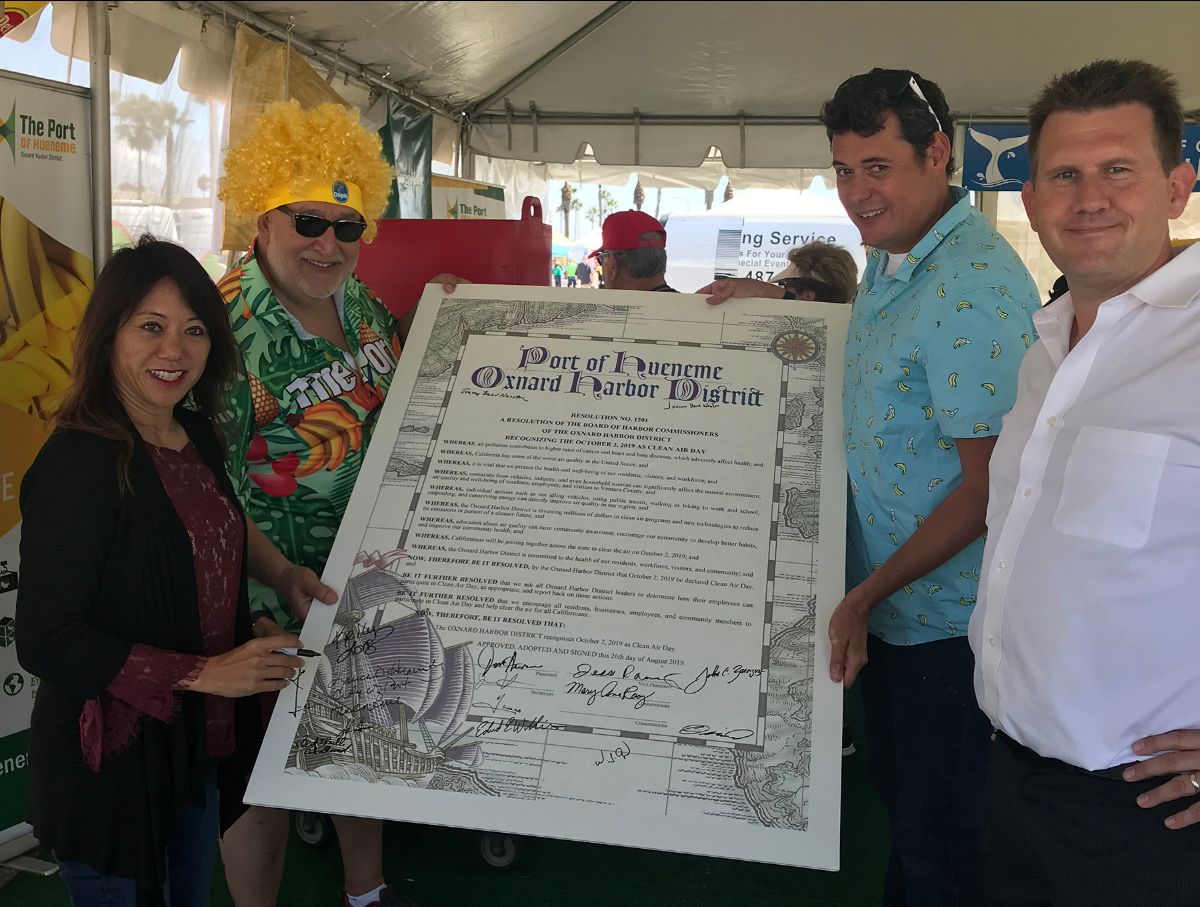 Ventura County Supervisor Kelly Long stated, “What a great day with the Port at their annual Banana Festival. Home to the Greenest Port in the USA, our County has a true gem that not only creates good jobs, but also is on the cutting edge of environmental initiatives. It’s my pleasure to work with them in continuing sustainable growth for our County for generations to come!”

Throughout the day, attendees not only celebrated all things banana, but also learned about the automobiles, high and heavy cargo, fertilizer and squid products that move through the Port on a daily basis. In addition, the community was able to tour the train which transports various cargo to and from the Port, including automobiles and military cargo.

Kristin Decas, CEO and Port Director stated, “Banana Festival day is one of our favorite days of the year, as we get to open our Port to the community and share with them the incredible work taking place in their own backyard. You can feel the camaraderie as people walk the Festival taking pride in hearing that their Port is a place of opportunity and the environmental leader in their community.” 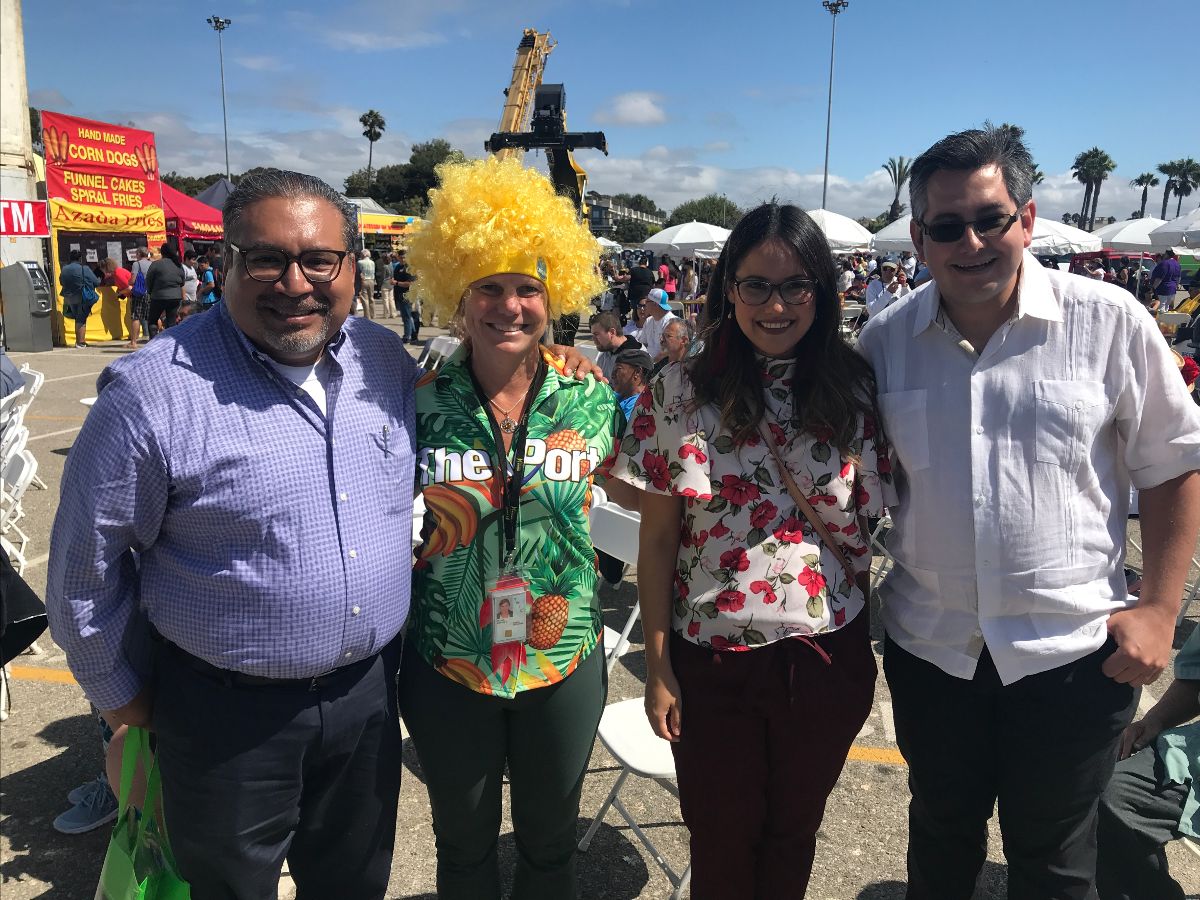 Festivalgoers Walter and Camille Morris of Oxnard stated, “We’ve never done the Port tours before, and we learned a lot on them. We’ve lived here 30 years, and we’ve never really known about the Port. Today, we got to see the Port from two different sides, the land and water. It was a great experience, learning that the Port is the Greenest in the USA, makes you want to do green things and be more fuel efficient!”

The Port would like to give a special acknowledgement to the Festival Director Kellie Meehan owner of Searle Creative Marketing & Design group and her incredible staff for all their hard work.