Port Goes Around the World for International Trade Week

Port Goes Around the World for International Trade Week

Trade consulates, multinational companies, and Ventura County’s local business community convened on May 21, 2019 to talk trade, tariffs and the new USMCA agreement at the Port of Hueneme.

Oxnard Harbor District President, Jess Herrera welcomed attendees stating, “Trade, it’s a beautiful thing. It drives economic growth, enhances efficiency, and increases innovation.” Herrera continued, “Leading economists will attest that the presence of a seaport spurs higher wages for the local workforce, provides greater access to higher quality goods, and serves as an economic engine for the people in that community – our community is living proof of that.” The Port serves as the direct link between California’s growers and manufacturers to the global market, generating over 15,834 direct and indirect jobs. 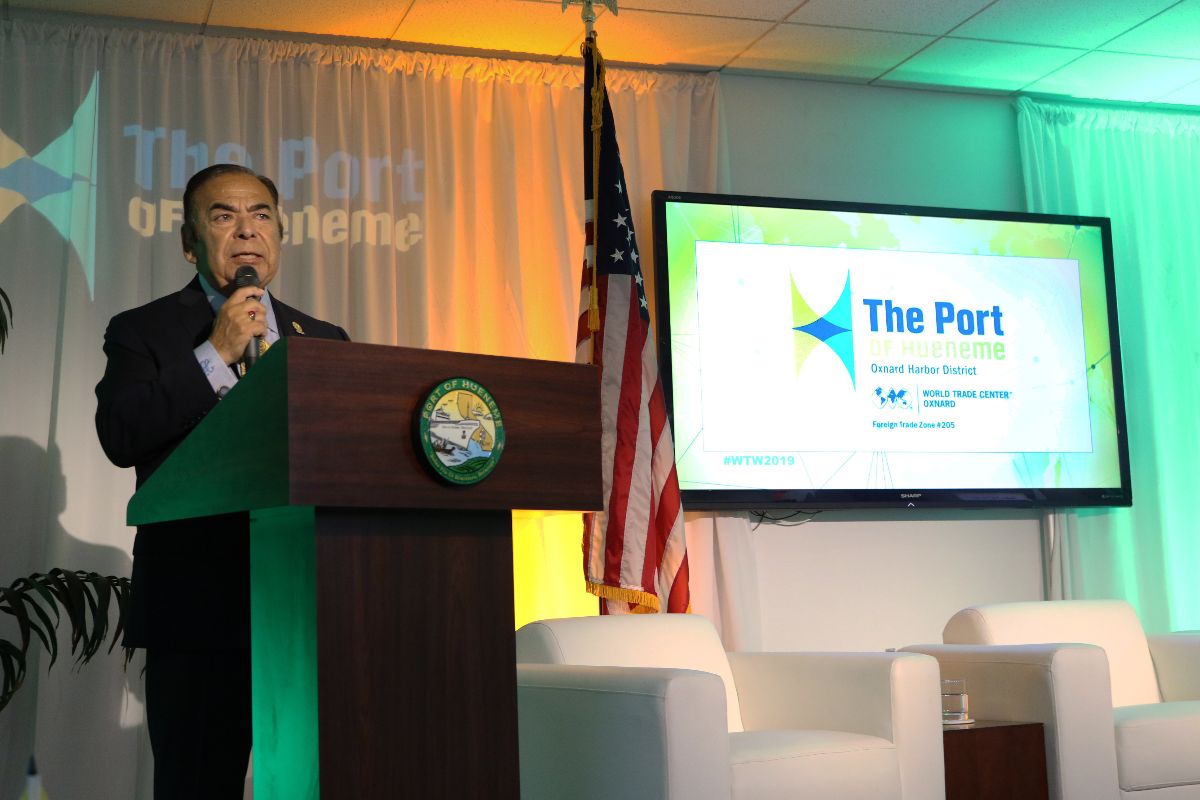 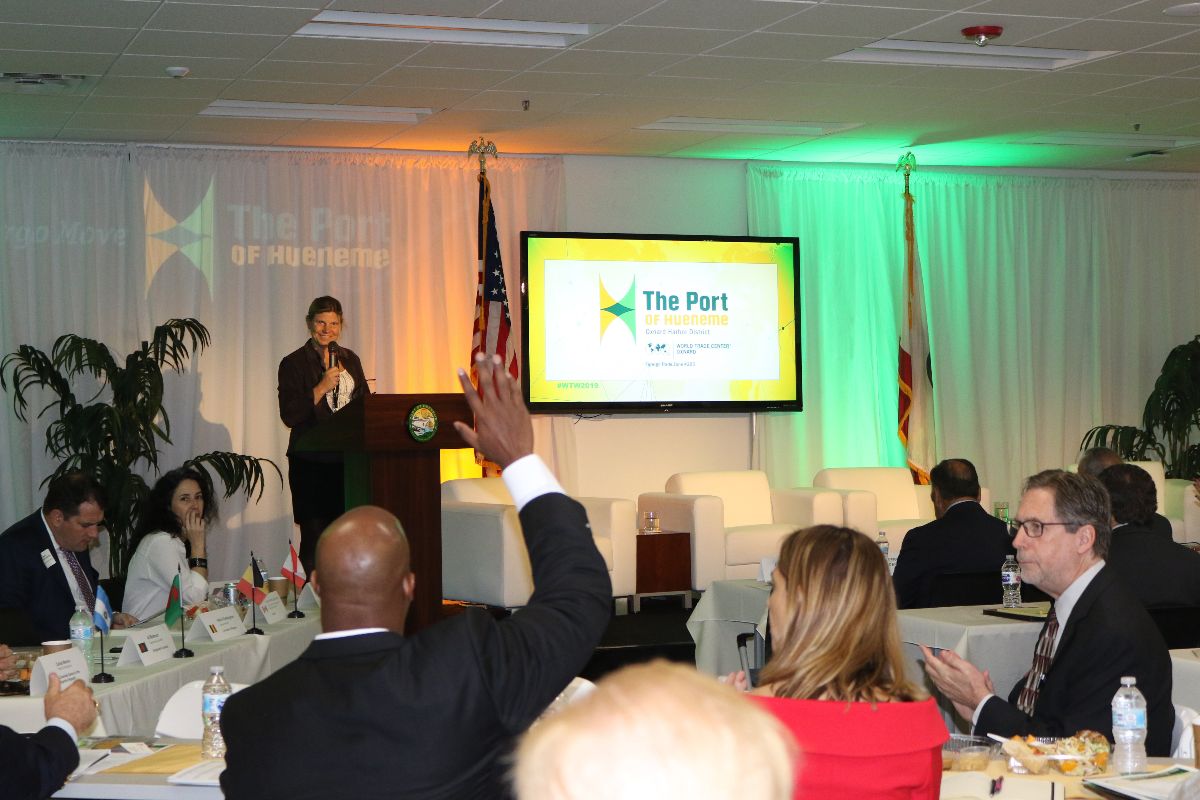 CEO & Port Director, Kristin Decas emceed the event and reflected, “As you see here today, our relationships with our trading partners are very strong. We just celebrated the Port’s largest trading year to date with 1.6 million tons of cargo, and we look forward to building on that success.” Decas continued, “The more trade our customers bring through our Port directly translates into more family-sustaining jobs for our community and resources to invest in our social programs and green infrastructure.”

Argentina, Bangladesh, Belgium, Canada, Ecuador, Guatemala, Hong Kong, Mexico, and Peru took attendees on a trip through their country’s traditional cargos and emerging markets as they forecasted growth and investment opportunities in 2019. The Port’s largest trading partner by tonnage, Guatemala, was present to build on the recent Sister Port relationship developed between the Port of Hueneme and Puerto Quetzal, Guatemala.

Santiago Böche Sánchez, Director Representative of Workers, Puerto Quetzal stated, “It’s a new born agreement we signed last January, so we have good expectations for it in terms of new ways to explore and share technologies, products, and operations.” Sánchez continued, “[Today] was a very good experience, as it brought together, in one place, very different perspectives on the economic future and we will take this experience back home to make stronger positions regarding the economic situation that we are in.” 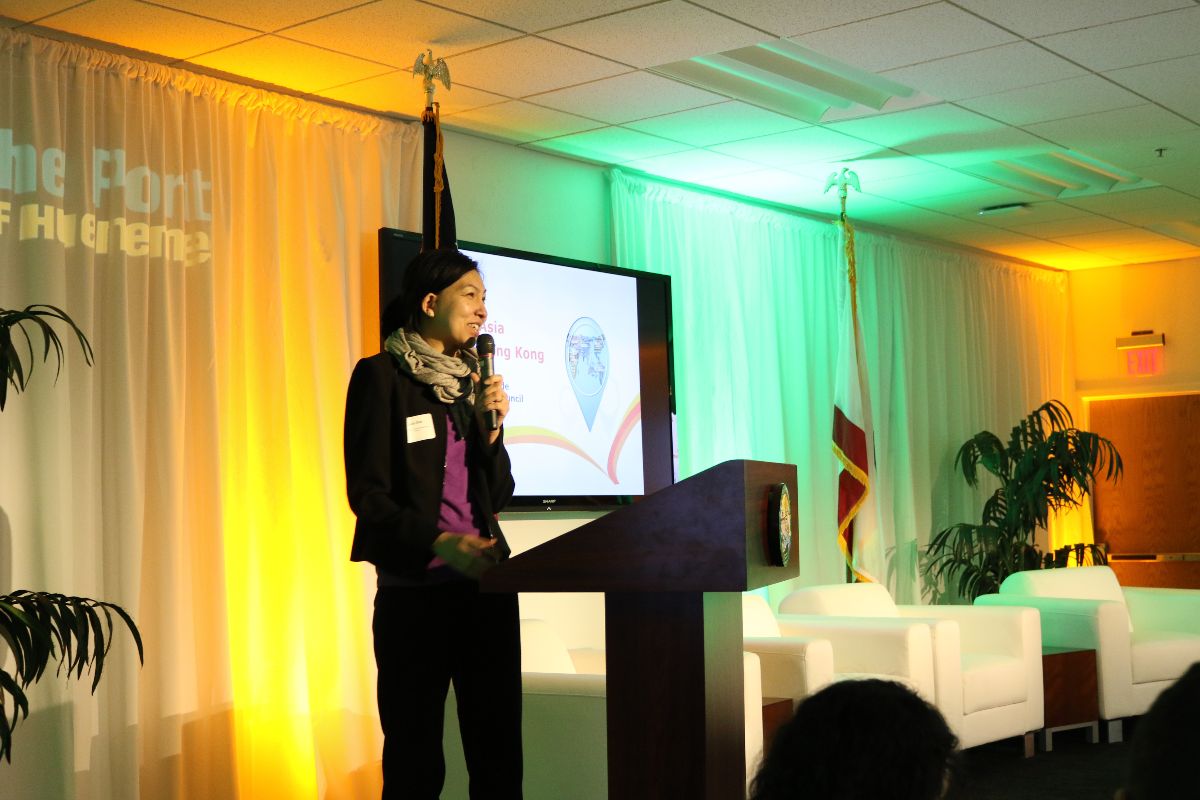 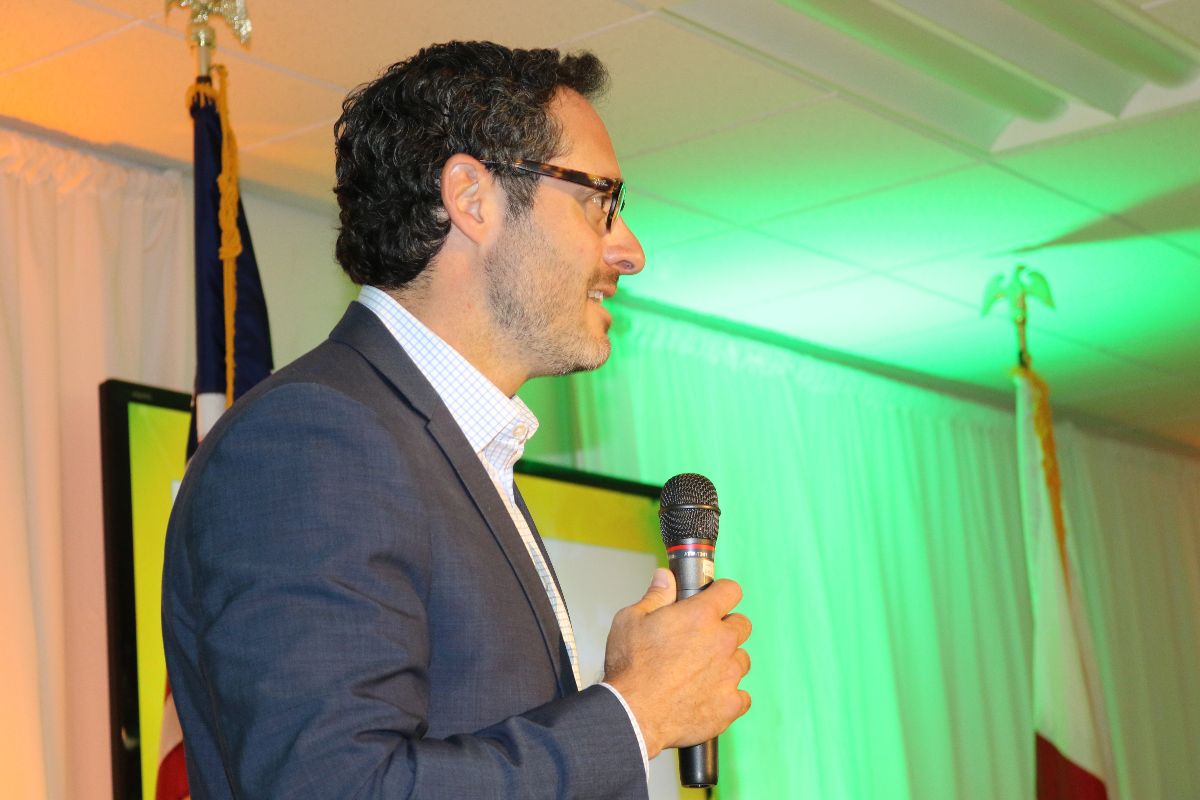 As Argentina looks to expand trade with North America, Carlos Moreno, Trade Commissioner, Consulate General of the Argentine Republic stated, “The U.S. is Argentina’s third largest commercial partner behind Brazil and China, mostly trading through the east coast of the United States. We are working to expand to the west coast as connectivity has improved.”

Brian Peck, the Director of the Center for Transnational Law and Business at USC’s Gould School of Law served as the keynote speaker for the event. Peck expanded on the current priorities of the Trump Administration, highlighting the focus shifting from unilateral pressure to multilateral pressure when it comes to trade agreements. Specifically, the U.S., EU, and Japan appear to be working in concert to drive pressure on China. 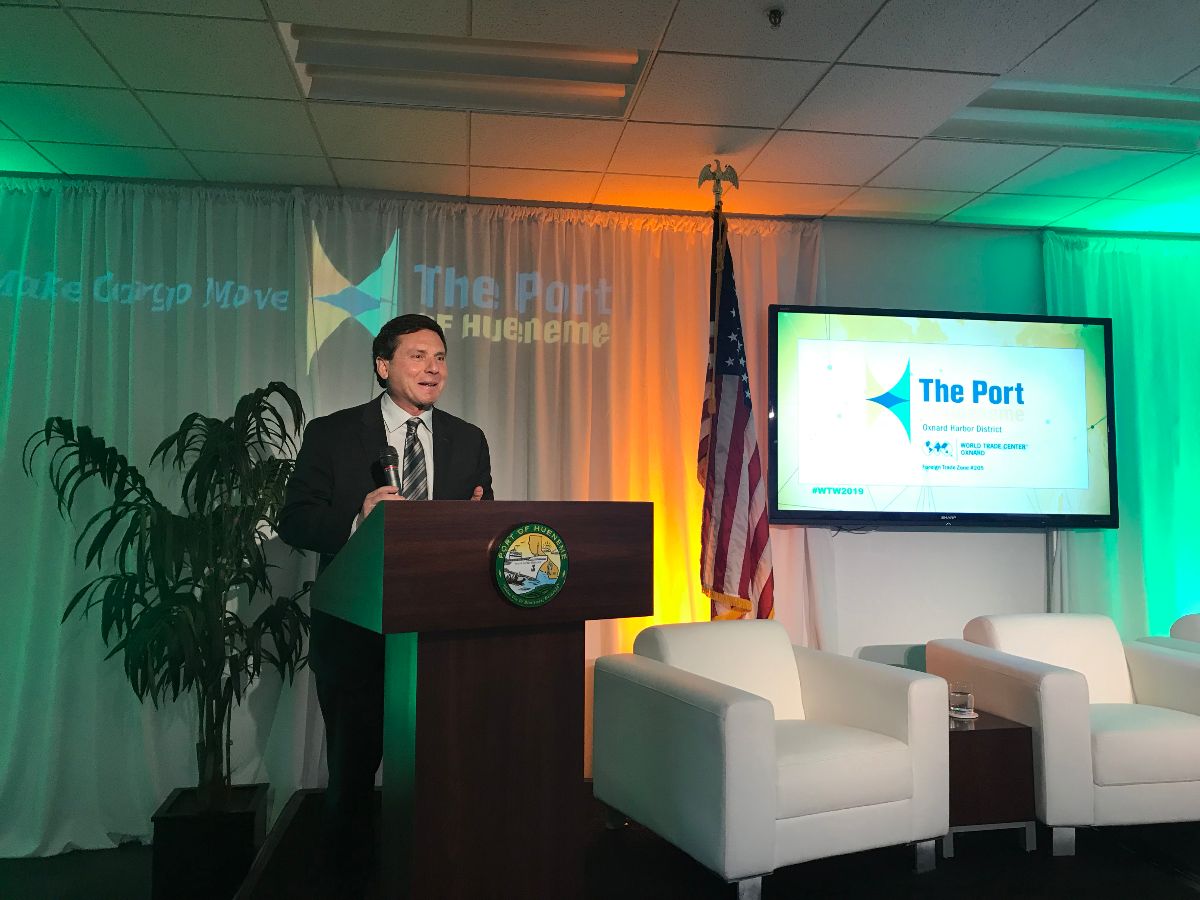 Peck touched on the impact these agreements have at the local level, “It’s great to see a regional port first hand, that is very important to the local economy of Ventura County with the agriculture and autos. For me, it is a learning experience on the importance of trade at the local level. Seventy percent of the U.S. GDP is based on trade, and so it goes for the national level, the state level, and the local level.”

U.S., Mexican, and Canadian representatives weighed in on the new USMCA (U.S./Mexico/Canada Trade Agreement) during a roundtable discussion moderated by David Habib, Jr. of the District Export Council. 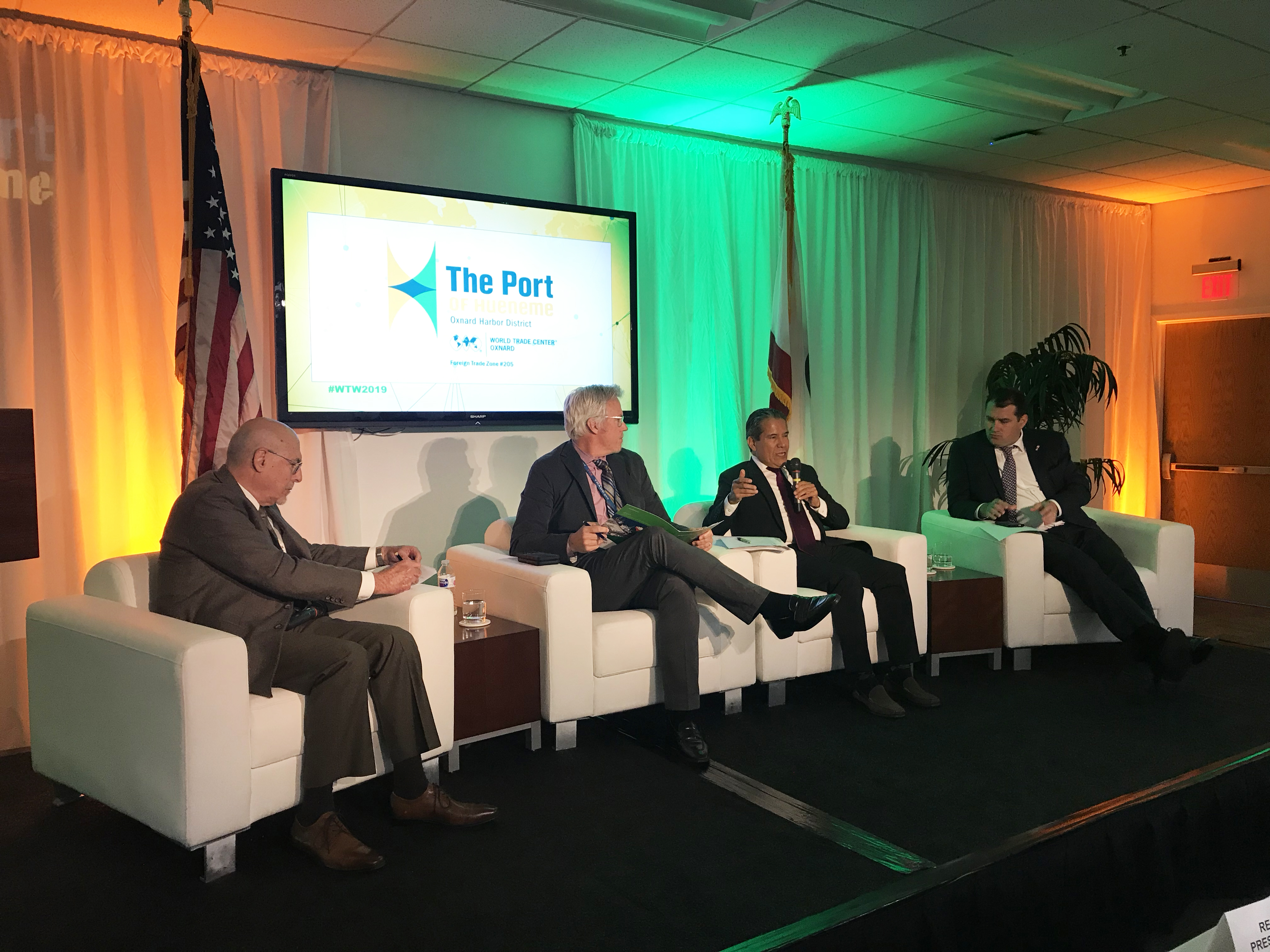 Gavin Nardocchio-Jones, Consul and Program Manager of Political-Public Affairs of Canadian Consulate identified Canada’s priorities in negotiating the agreement, “For Canada, number one is preserving NAFTA and our trilateral territory, number two is keeping a rules-based system of trade where there are dispute mechanisms, investor protections, and ultimately where we have a clear and concise timeline for renegotiations without a sunset clause.” Nardocchio-Jones foresees the Canadian Parliament ratifying the USMCA by the end of the current session, which ends July 1st. He concluded, “There is wide bi-partisan support for USMCA in Canada.”

Richard Swanson, Director of the Pacific South Network for the US Commercial Service, US Department of Commerce stated, “The USMCA resulted in significant updates to the existing NAFTA, including improving market access for manufacturing and agricultural exports, as well as the inclusion of important new provisions in areas like digital trade and good regulatory practices.”

During the roundtable discussion, Roberto Rodríguez Hernández, Consul General of Mexico, Oxnard stated, “Mexico is supportive of the USMCA as it is important that we have agreements instead of disputes to benefit our people and improve travel among our countries.” He continued, “Mexico has over 50 free trade agreements in place including one we are expanding with Japan, as they like to import Mexican-made products.”

To cap off the event, the Oxnard Harbor District Board of Commissioners presented awards to three companies exporting through the Port of Hueneme.

Mary Anne Rooney, Oxnard Harbor District Commissioner presented ZPower LLC the New and Innovative Exporter Award. “This company is doing great things in our County, employing over 400 Ventura County residents and is revolutionizing the world of rechargeable microbatteries, and exceeding $20 million in export related revenue in their first year as a company.” ZPower LLC is the only company in the world manufacturing recyclable silver zinc batteries, exporting many of them to Europe.

McCain Foods USA was presented Exporter Achievement Award for their rise in produce exports by Oxnard Harbor District Vice President Jess Ramirez. “McCain Food USA’s main product is frozen French fries through the Port of Hueneme, however their company is much more than that. I applaud them for their ‘Be Good. Do Good’ philosophy which promotes strong work ethics and a commitment to supporting the environment and communities around them.”

Jess Herrera, President of Oxnard Harbor District presented General Motors USA with this year’s Automotive Exporter of the Year award referencing the company’s automotive exports through the Port to Japan and Korea.

To wrap up the event, President Herrera concluded, “This was a great event to start the World Trade Week, hopefully we will keep expanding this as it is so important to our community, Ventura County, and California. Our Port’s strategic location is very important to serving all of this area, and we expect to continue doing so in a great way that provides great paying jobs.”

Click here to learn more about the countries with which the Port of Hueneme trades.

The Port of Hueneme is one of the most productive and efficient commercial trade gateways for niche cargo on the West Coast. The Port is governed by five locally elected Port Commissioners. The Port moves $9 billion in goods each year and consistently ranks among the top ten U.S. ports for automobiles and fresh produce. Port operations support the community by bringing $1.5 billion in economic activity and creating 15,834 trade-related jobs. Trade through the Port of Hueneme generates more than $93 million in direct and related state and local taxes, which fund vital community services. In 2017, the Port of Hueneme became the first port in California to become Green Marine certified. www.portofh.org