On September 29, 2018, over 12,000 people, breaking attendance records, visited the Port on Saturday to celebrate its 7th Annual Banana Festival. The festival showcased the Port’s significant reach around the world in international commerce and highlighted the Port’s commitment to environmental stewardship and humanitarian work in Guatemala.

Traversing the festival grounds, visitors learned the Port is one of the nation’s top ten automobile ports and a gateway to move the crops grown here in Ventura County to global trading partners. Of course, the banana was a big part of the show, being the Port’s highest volume import.

“Today is not just about enjoying the wonderful banana treats, it is so much more,” explained Oxnard Harbor District President, Mary Anne Rooney. “It is about interfacing with our local community, sharing with them all of the new and exciting projects and initiatives taking place at their Port, and thanking our customers who invest in our community year over year.”

Throughout the day, attendees not only celebrated all things banana, but also learned about the automobiles, high and heavy cargo, fertilizer and squid products that move through the Port on a daily basis. In addition, the community was able to get up close with the train which transports various cargo to and from the Port, including automobiles and military cargo. Kristin Decas, CEO and Port Director stated, “The festival celebrates our position as one of the top ten banana and automotive hubs in the US by opening up our doors to the community for a most authentic experience of a working port. Attendees learn about the vast economic and global opportunities our Port provides to local residents and businesses with a fun banana twist.” 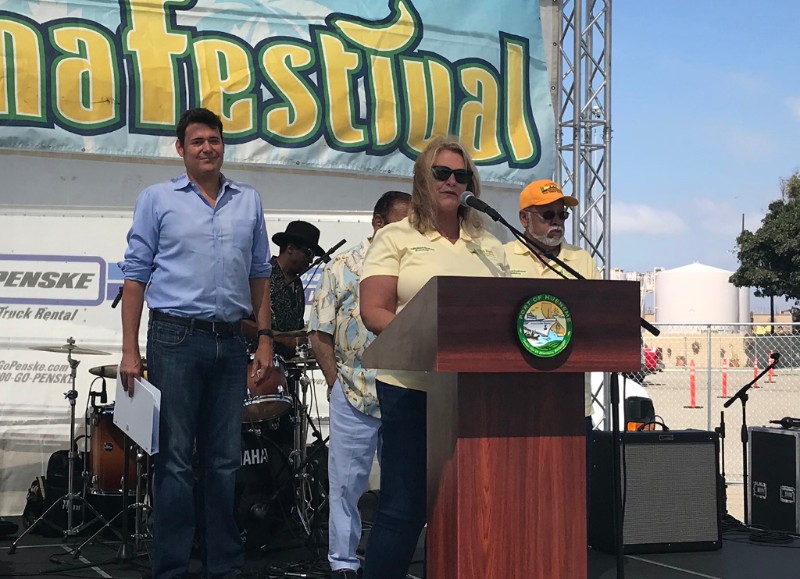 Festivalgoers began the day celebrating the over 3.3 billion bananas that come through the Port of Hueneme each year, making the it the banana capital of the West Coast. They were treated to free bananas from Chiquita and Del Monte Fresh, the Port’s two largest banana importers. Attendees also enjoyed various banana inspired foods including: banana taffy, banana flavored popcorn, banana beignets, chocolate frozen bananas, banana funnel cake; and on the savory side, banana empanadas, banana lumpias, and peanut butter banana melts from the grilled cheese truck! 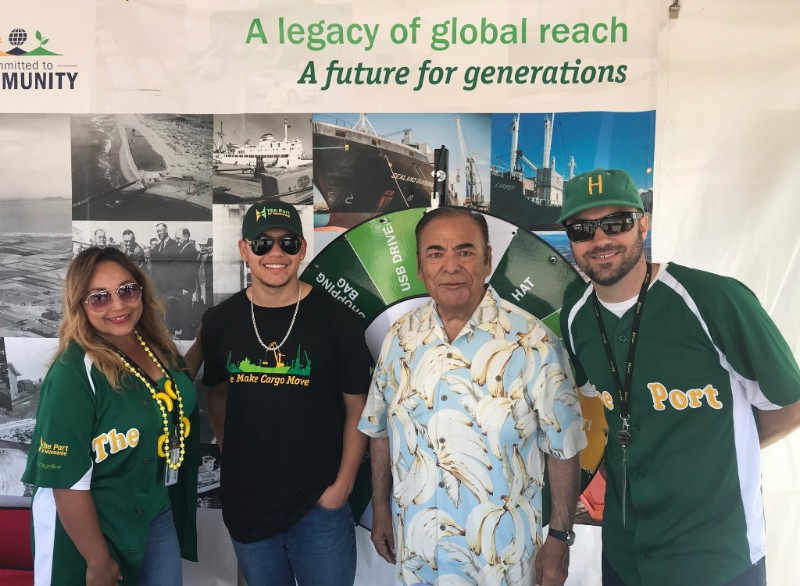 Oxnard Harbor District Vice President Jess Herrera stated, “It is inspiring to see such a diverse representation of our community coming out to the Port today enjoying the festival. We have people from all walks of life here to celebrate the Port and the thousands of jobs and countless opportunities it brings to our families, communities, and region – we are truly blessed to have the Port in our very own backyard.” 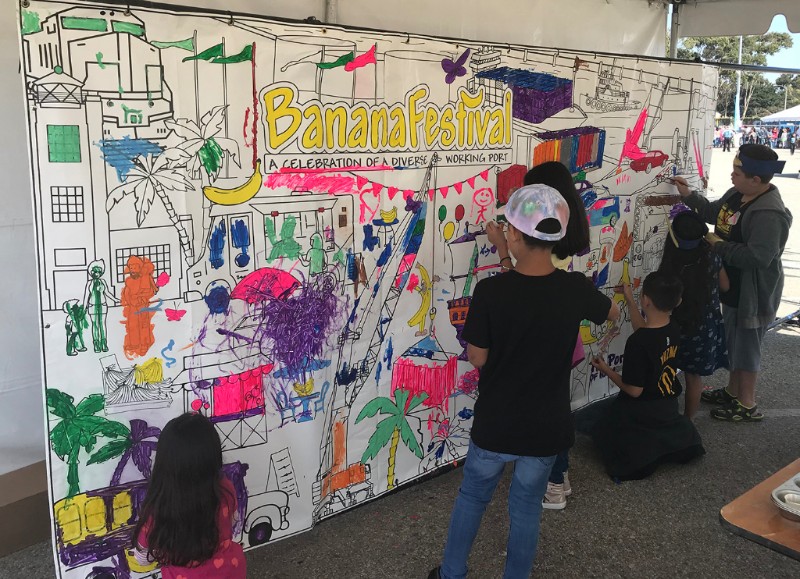 Youthful artists work on the Banana Festival mural, a feature new to this year. 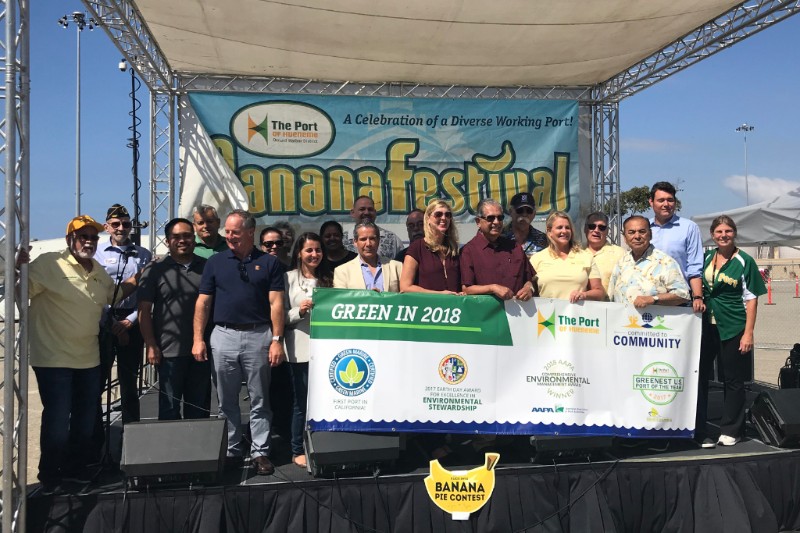 During the festival’s main stage program, the Port’s Board of Harbor Commissioners unveiled the “Green in 2018” banner to celebrate all the Port’s environmental initiatives and awards that have culminated over the past year. These include being named the Greenest U.S. Port at the Green Shipping Summit, becoming the first port in California to earn a Green Marine Certification, receiving the 2018 Comprehensive Environmental Management Award from the American Association of Port Authorities, and embarking on several eco-friendly projects at the Port.

“This year is a milestone for the Port as our environmental efforts are being recognized on a national and international level,” Oxnard Harbor District Commissioner Jason Hodge noted. “We look forward to continuing to lead the Port industry in sustainable port management as we embark on the next chapter of the Port’s future.”

Oxnard Mayor Tim Flynn, in attendance with all his fellow City Councilmembers on stage addressed the crowd with a playful announcement, “We are going bananas at the Port today, and you know what? We are going to create bananas of more Port jobs!”

City of Port Hueneme Mayor ProTem, Will Berg stated, “We congratulate the Port on being named the Greenest Port in the United States, and are excited for our continued and future partnerships making our community a wonderful place to live, work, and play!”

Click here for more information on the Port’s environmental initiatives and awards. 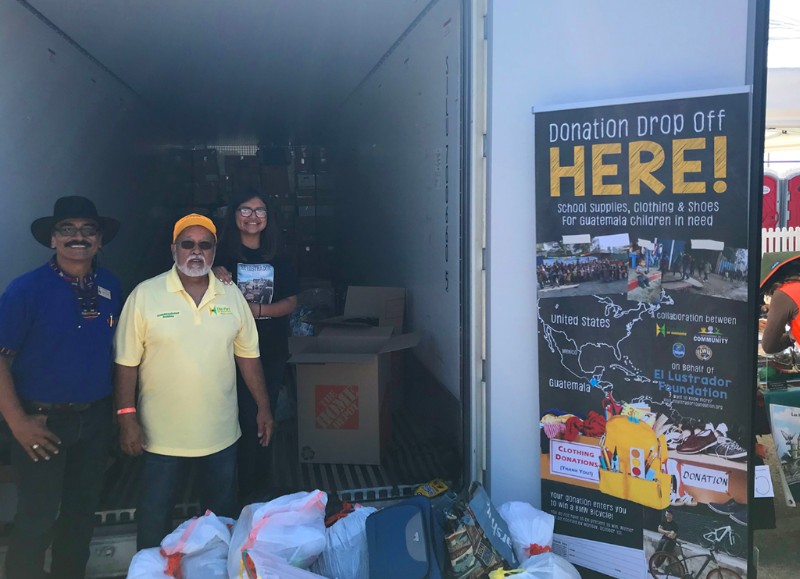 As the day continued, the Port launched its “Fill the Container Challenge” to collect donations for the school children of Guatemala. “We are asking our community to join us in filling this Chiquita container which will be shipped to Guatemala in January,” explained Oxnard Harbor District Secretary Jess Ramirez. “These items will go directly to the Guatemalan children who need help to continue in school as a way to make a better life for themselves and their families.” The Port has partnered with the ILWU Local 46, Chiquita, and El Lustrador Foundation to accept donations through December 15th.Those who dropped off donations at the container, were entered into a drawing for a BMW premier road bicycle. In the spirit of the festival, Al Cardona of BMW said, “We are honored to be able to partner with the Port on such a worthy cause this year, and are proud to live and conduct our business in such a positive and generous community.” BMW is one of the Port’s customers and their West Coast distribution center is located two miles down Hueneme Road, which distributes over one third of the nation’s BMWs. 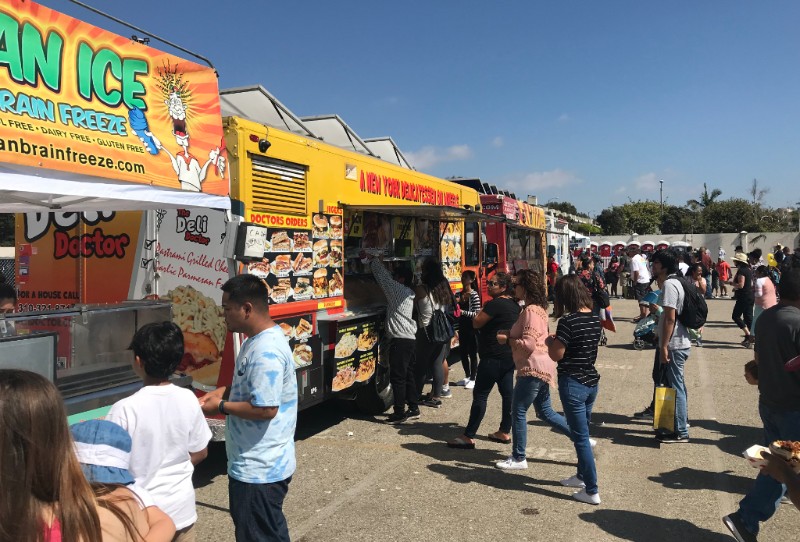 Some of the many food trucks at the Banana Festival.

This year’s festival brought out the kid in everyone, as people of all ages danced to the live music, put their artistic touch on the festival’s commemorative mural (a new feature at this year’s Festival), explored the harbor on boat and bus tours, and marveled at the larger than life cranes and cargo handling equipment on display. The Port’s partnership with the American Heart Association was also highlighted as they launched the Life’s Simple 7 Program to teach local kids how to live heart healthy lives through physical activities and healthy food choices. At the reptile tent, kids were able to interact with some of the species that live in the tropics where the bananas are grown. 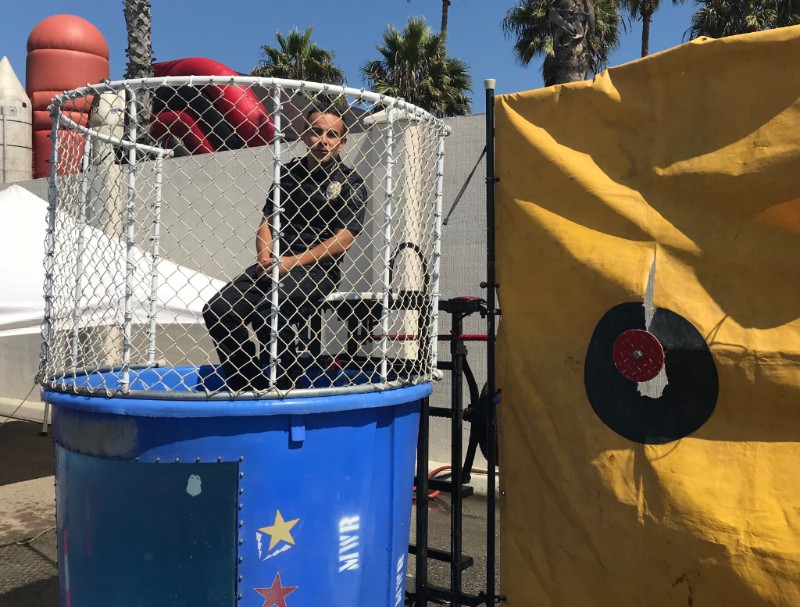 Port Hueneme Police Chief Andrew Salinas gets dunked at the tank at the Banana Festival. 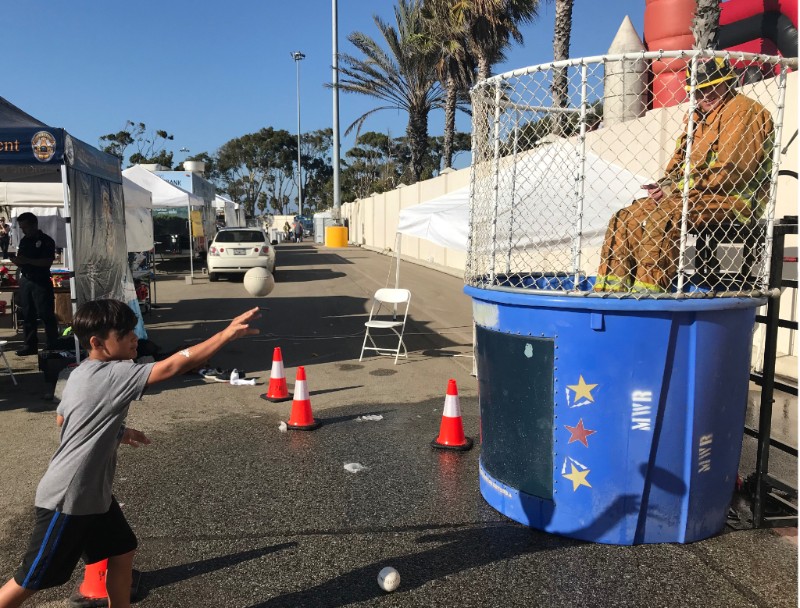 Oxnard Harbor Commissioner Jason Hodge, in his firefighter uniform, in the dunk tank. 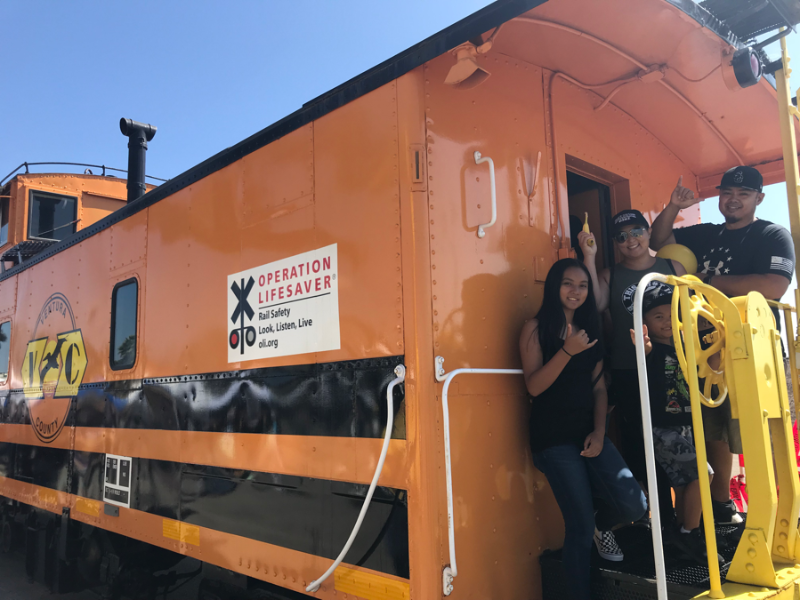 The Fisher family enjoying learning about all the products that travel on the Ventura County Rail Way to and from the Port!

When asked what he thought about the Banana Festival, Makaio Fisher, age five exclaimed, “it… is… awesome!” Makaio’s father, Michael Fisher, explained, “this is our first time to the Banana Festival. I surf on the other side of the beach here, but had never been inside the Port. It’s so cool to have a Port in our own back yard – I’m very impressed!”

The Port would like to give a special acknowledgement to the Festival Director Kellie Meehan owner of Searle Creative Marketing & Design group and her incredible staff for all their hard work. 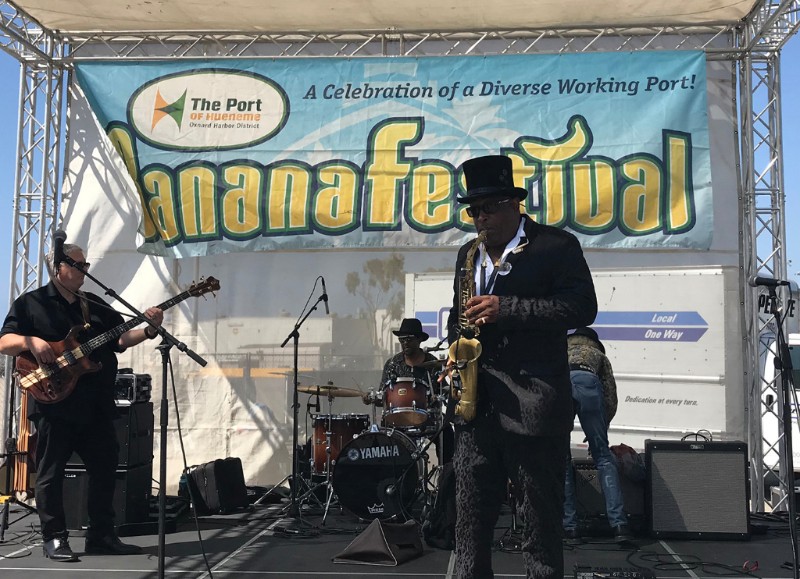