The Port is adding a pre-funding element to their financial plan for Other Public Employee Benefits (OPEB) costs. OPEB consists largely of health care premiums for retired employees. As a public agency, the Port currently provides these benefits. Last week, the Board of Commissioners of the Oxnard Harbor District (the Port of Hueneme’s governing body) voted to make a $500,000 opening deposit into an irrevocable trust account with California Employers Retiree Benefit Trust (CERBT). This trust, administered by CalPERS, will serve as the pre-funding element supplementing the pay-as-you-go method currently in place.

“This movement toward the pre-funding method is another example of our commitment to stay ahead of the curve,” said Board President Jason Hodge. “In doing so, the Port’s bottom line not only benefits, but the District as a whole enjoys more financial security. It is as much an investment in the community as it is in the Port’s employees.” 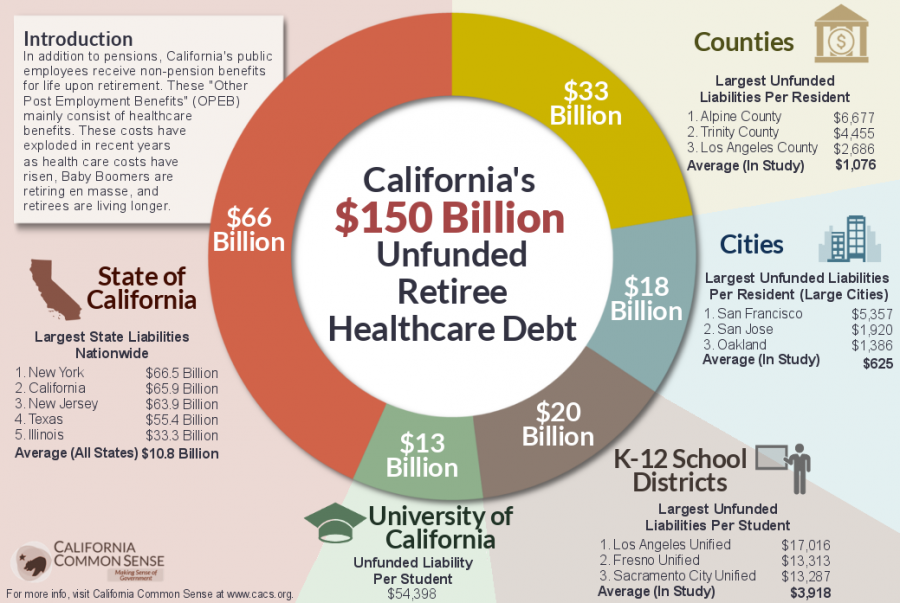 Caption: Special districts such as the Oxnard Harbor District are included in the $66 Billion of state unfunded debt. The Port’s pre-funding element is intended to reduce this unfunded debt. Source: California Common Sense

A 2014 study conducted by United States Common Sense, a policy analysis group started at Stanford University, found the State of California to have over $150 billion of unfunded OPEB debt. One of the major problems attributing to this daunting number is that most public agencies only utilize the pay-as-you-go funding method for OPEB. In taking steps now by adding the pre-funding element, the Port is avoiding passing on debt to future generations and preventing potential budget shortfalls in future years.

According to Andrew Palomares, Deputy Executive Director and the Port’s CFO, “The Port operates without taxing its local constituents, and relies on its own fiscal efficiencies to run the daily operations of the Port. To me, it’s like setting aside some of your own money for your young child’s college education savings fund now, except that the funds may not be used for anything other than education expenses. By putting money aside now for future use, your funds will grow and earn more money, resulting in the need for less current funding at the time your child is ready for college.”

The Port’s $500,000 deposit, along with anticipated investment returns of 7.28% compounded over the investing period, will fully fund the Port’s OPEB liabilities over time. This new method of funding directly impacts the residents of the Oxnard Harbor District as they will not be seeing resources redirected from the Port sponsored community events to pay for unfunded OPEB liabilities in the future. The Government Finance Officers Association of the United States and Canada (GFOA) identifies this type of pre-funding OPEB as “best practice”. Based on an independent valuation report, the Port’s Unfunded Actuarial Accrued Liability (UAAL) for OPEB was approximately $8.9 million as of July 1, 2016. Establishing the OPEB Trust will greatly reduce this number.

“The impact of creating this trust is two-fold,” said Port CEO Kristin Decas. “We will see our initial investment grow exponentially to cover our OPEB obligations, but it also signals to the credit agencies that our long-term obligations are being funded and our ability to pay debt service in the future is not hampered by OPEB.”